As Howard Nemerov said in Learning By Doing http://www.blueridgejournal.com/poems/hn-learn.htm

They’re taking down a tree at the front door,
The power saw is snarling at some nerves,
Whining at others. Now and then it grunts,
And sawdust falls like snow or a drift of seeds.
Rotten, they tell us, at the fork, and one
Big wind would bring it down. So what they do
They do, as usual, to do us good.
Whatever cannot carry its own weight
Has got to go, and so on; you expect
To hear them talking next about survival
And the values of a free society.
For in the explanations people give
On these occasions there is generally some
Mean-spirited moral point, and everyone
Privately wonders if his neighbors plan
To saw him up before he falls on them.

Maybe a hundred years in sun and shower
Dismantled in a morning and let down
Out of itself a finger at a time
And then an arm, and so down to the trunk,
Until there’s nothing left to hold on to
Or snub the splintery holding rope around,
And where those big green divagations were
So loftily with shadows interleaved
The absent-minded blue rains in on us.
Now that they’ve got it sectioned on the ground

It looks as though somebody made a plain
Error in diagnosis, for the wood
Looks sweet and sound throughout. You couldn’t know,
Of course, until you took it down. That’s what
Experts are for, and these experts stand round
The giant pieces of tree as though expecting
An instruction booklet from the factory
Before they try to put it back together.

Anyhow, there it isn’t, on the ground.
Next come the tractor and the crowbar crew
To extirpate what’s left and fill the grave.
Maybe tomorrow grass seed will be sown.
There’s some mean-spirited moral point in that
As well: you learn to bury your mistakes,
Though for a while at dusk the darkening air
Will be with many shadows interleaved,
And pierced with a bewilderment of birds. 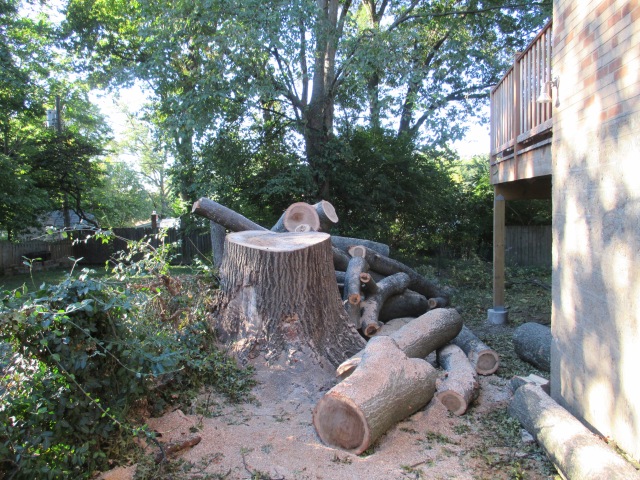 Though fortunately, unlike Nemerov’s poem, the tree did bear the evidence of its near demise in the wood and it was not a mistake to take it down. It has become quite the neighborhood rallying point, the pile of trunk chunks in the front yard. Our next door neighbor called the woman who was second owner of this house who lived here for 40 years, raised a family, saw her husband’s death and then finally moved to a condo. A young 85 she is, a former model, still slim and sprightly and bright-spirited. She loves this house and has been to eat dinner with us and visit on occasion- anyway, our neighbor called her to tell her to come see the tree before they haul the pieces away. And she came and we sat on the back porch and heard stories of her life in this house and the oddities built into it that she and her husband never figured out and we never have- though we now know that one switch inside a closet used to be to an intercom that did not work when she and her husband bought the place.