The moon was officially full yesterday, but clouds prevented me seeing it. As I came downstairs to make coffee this morning, its light was coming through the window. In my nightshirt, the best I could do was this photo of moon-shine through the trees. It was certainly a full moon yesterday. An officer shot a young man in a neighborhood north of here and the ensuing protest erupted into rioting and looting. Things are calmer today, but I see its made the national news. The birds are much quieter in the mornings now, light comes later, migrations will begin soon. It is a good time to look for spiders, too. Yesterday Dennis and I went to a park where we’ve never gone before and saw this magnificent white oak tree, 271 years old. 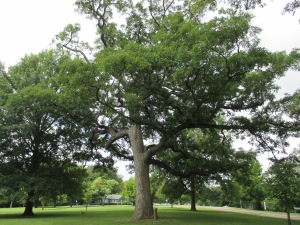 Also saw this box turtle and jewel weed getting ready to pop.

This entry was posted in Moon. Bookmark the permalink.