Still blissfully cool for August in St. Louis. As I sat on the back steps this afternoon I saw a hummingbird come drink nectar from the cardinal flower we planted in the spring. I wasn’t quick enough to get his photo, but maybe later, now that I know he comes around. Also, in preparation for waterproofing our deck, I removed the rope from a deck post that went over a nearby limb and held up the little wren house that a lusty wren tried to lure a mate to earlier in the season. That pairing didn’t 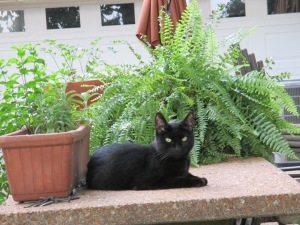 take, at least not in that house, but I discovered a little nest built of twigs inside it. Maybe he built the nest on spec, like red winged blackbirds do. I’ve heard wrens all summer, so maybe they are raising young nearby. Also today I saw 3 young robins with mom robin at the birdbath in the back. So Britches has gone easy on the robin population so far.

Tonight we will go to a ball game, I hope to watch the Cardinals win, though it’s been a rough season so far, and just yesterday they traded two team members away- I don’t understand all that. I guess it  all comes down to winning and money and if I knew more about it it would suck all the joy out of it, so I will remain ignorant for now.

This entry was posted in birds, Flowers. Bookmark the permalink.