And I remembered Alvin, the man who used to come sit on the west-facing stoop of our old home every evening to watch the sun set. He is gone now, but I remember him clearly, remember his stories of living with his friend who had schizophrenia, stories of struggle and hope. No matter how tired he was, he always rode his bicycle to come watch the sun set. Sometimes I sat with him. Here he is in 2007. With some text I wrote back then about him: 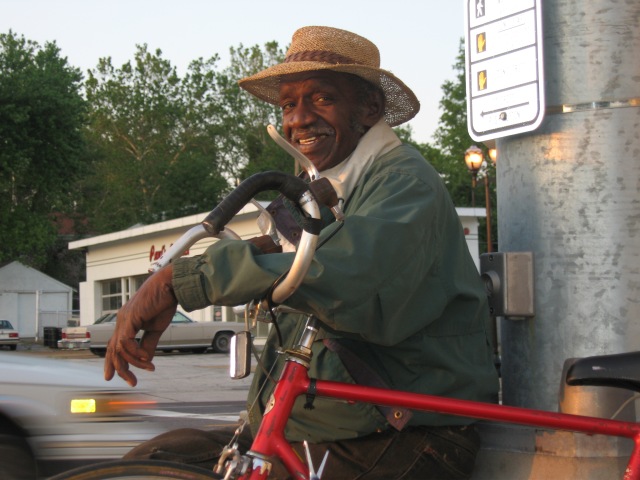 …. Then home, and there was Alvin, sitting on the corner with his bicycle, watching the sun go down. I told him I couldn’t find the passage in Ecclesiastes about “blessed are the eyes that behold the sun,” and he quoted the entire chapter for me- He thinks it’s chapter 11. Says that some people have more evil than others, and some more good than others, and it’s all a mystery. I said I like it that way, I like mystery. No point in knowing everything.

Alvin left a note on the car yesterday telling me where in Ecclesiastes to find the saying about the eyes beholding the sun- Chapter 11, 7th verse. I talked with him tonight, sat out on the stoop with him. He got out of the state penitentiary in 1969. Said it was in the penitentiary that he was saved. He’s been watching the sun rise and set every day since then, since the day he got out. Says God blesses him and tries him.

This entry was posted in Miscellaneous musings. Bookmark the permalink.

2 Responses to On Seeing Alvin