It was 13 degrees when I woke this morning and Jack Frost was on the windowpanes. I loved those mornings when I was a girl, waking up snug under the covers  and looking at the patterns in the frost on the window next to the bed, tracing them with my finger. 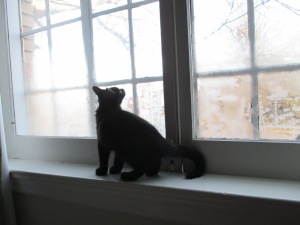 I was cleaning today in preparation for family coming this Thanksgiving week, and smelled an awful smell in the room where guests stay. Its source was a nearly intact vole, half digested, which Britches had spit up. It must’ve been what was stuck in her gullet last week when she wouldn’t eat. I recall saying then that her breath smelled like something had gone down in there and died, and I’ll be damned if that wasn’t just about the truth.

This entry was posted in cats, Winter. Bookmark the permalink.