We returned last night from a week’s stay in a cabin next to Lake Michigan in Door County, Wisconsin. The original impetus was a vacation fashioned around a century bicycle ride my sister and I signed up for. She rode, I didn’t, due to an Achilles injury, but that didn’t prevent a few good hikes later in the week after I’d healed some. It was a perfect time to escape the last hot week here in St. Louis, not counting the fact of an approaching grant deadline. I have tired of putting life on hold until the next deadline passes- there is just one after another anymore and my former work obsession would kill me in the current grant climate. So vacation it was, the first one for Dennis and me together in many years. I understand that lots of St. Louisans go to Door County to escape summer heat, but this I didn’t know until the proprietor of the local gas station told us on our last day there. He said the locals call us “turkeys”, we tourists, and I can’t blame them, stomping all over their beautiful peninsula. But as the station owner said, there’s no Thanksgiving without turkeys- tourism dollars are a huge part of the economy there. The winter’s are pretty bleak, I imagine, cold, lots of snow, no work. One woman told us she and most of her friends are simply without work in the winter; she reads a lot then. Waits on tourists through the summer. Drinking is a huge pastime in winter and we heard many locals speak of “their” telephone poles or trees, hit while driving drunk. Most of the farms there are very tidy- folks don’t leave their old cars and junk out on display like they do in parts of Missouri. Very tidy and proud these farms looked. But one day we were driving down near Sturgeon Bay and came across a place on a corner in Lily Bay which was distinctly un-tidy with junk on display everywhere. We stopped to admire an old sawmill and met Dick Smith, the owner, who was pleased to give us a little history and a tour of his old equipment. Dennis, having grown up cutting timber and working in a sawmill, spoke the language. Mr. Smith’s shop had a sign across the front, “Smitty’s Lily Bay Social Center, Est. 1805.” His forebears had started it generations back and his shop was the original structure built by his great-grandfather. He wasted no time offering us some wine (we declined) and I soon discovered the 6 50-gallon barrels of homemade wine he had working there inside the shop. He himself was drinking Pabst Blue Ribbon beer. The wine is a big draw during the winter months, when men come to sit around the wood stove and drink. Besides the wine, the shop contained, in much disarray, a workbench, a small wood planer for making the small wooden boxes which he markets to tourists, and tools of all varieties hanging along the walls on all sides except the wine side.  Hanging from the rafters near the center of the shop was a bulletin board containing the obituaries of the social club members who’ve passed away: “That’s the board you want to stay off of,” said Mr. Smith. I did not take any pictures, didn’t think it appropriate and didn’t want to ask. 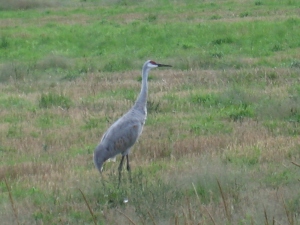 We saw lots of wildlife while in Door County. For starters we saw sandhill cranes on several days, stopping to rest and eat in farmer’s fields during their migration. Also saw lots of turkeys, the bird, not human, kind. Hummingbirds, and one day a sphinx moth outside a restaurant where we partook of a local tradition, a fish boil, which seems to me a waste of a perfectly good whitefish, but lots of folks like it, it seems.  Towards the end of the week we went for a hike in a wilderness area. The forest is amazing there, containing ash, birch, beech, black poplar, hemlock (the biggest beech and hemlocks I have ever seen), Northern red oak,  hard maple, spruce, fir, white pine, yellow pine, dogwood, and the most amazing collection of mushrooms I have ever seen. 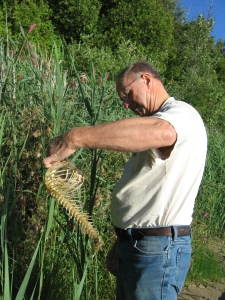 Ladybugs, the Asian kind, were all over the beaches. 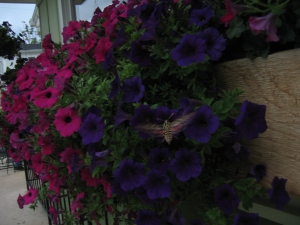 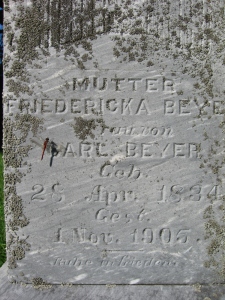 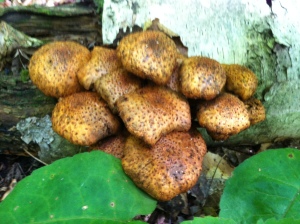 All the industry was in Sturgeon Bay 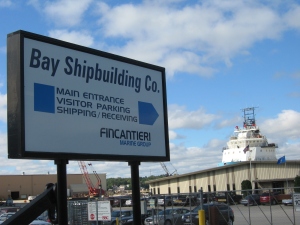 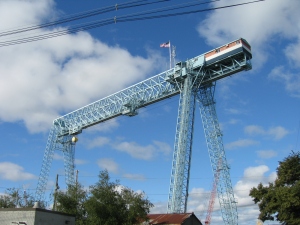 This entry was posted in Elsewhere. Bookmark the permalink.