I’d nearly despaired of getting a picture of this month’s full moon, since last night when we 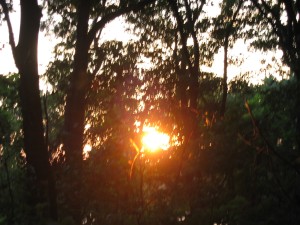 were out owl-watching the clouds covered it. But this morning when I walked into my little room the puddle of moonlight spilling through the window was the first thing I saw, so I quick got my camera and found that moon through the window, behind some trees. This morning rode my bike to work and looked under the cottonwood tree where last night we saw Charles eating a bird he’d just caught, feeding himself before tending to the young Velvet and Christopher’s breakfast. But I found no remains- I was hoping for feather or some sign of who it was he ate.  Also this morning I went up the hill by the woods where the owls hang out but didn’t see them; saw instead a man sitting on the tail of his white pickup truck playing his guitar. And big news- I heard a male quail calling over near the World’s Fair Pavilion. I heard a quail in the park two years ago, and even got a photo of him sitting on the back of a bench, but no sign of him since. I’m glad he’s still there, and chances are good that there are others. You can hear the insect sounds in the woods over the traffic sounds if you listen. And the grapevine hanging from the linden by the path is so low now that I duck to get under it- if I were a girl I could pretend I was in a rain forest.  Pictures later when I get home-