As I took a midday walk just now I saw, in a field on the far side of the footbridge, a brownish lump. Animal? I wondered, or just a tannish rock whose outlines resemble a curled-up animal? I walked over near to see, and called softly “Pupvig?” in case it was an animal. A grey-muzzled dog’s head lifted from where it had been nestled between paws and grass and looked at me. I came a few steps closer, but resisted going farther, being admittedly shy of wild dogs in the park, having met a few fierce and ugly ones. This one seemed gentle, but even if so, what would I do if it were abandoned and lost? I backed off a little to think about this. No sooner had I positioned myself beside a tree (in case the dog was fierce and came after me I would climb it) than onto the scene came a small woman with short hair in jeans and a jean jacket, bearing some sort of food for the dog. She approached and offered him a bite from her hand, he took it eagerly but gently. Poor soul, hungry and lost, maybe even giving up to die. But she stayed, fed him little bits, and soon had slipped a rope collar around his neck. She got him up, his sides were very thin. He walked with her, I could see she was taking him to her car, which she had parked nearby. A police officer and a park ranger approached in turn, the dog shied away and she shooed them off. When they had left she urged the old dog into her car and they drove away, he, I’ve no doubt, to meet a good life, what’s left of it. Then I realized that this morning I had asked for some help in trusting. Well. There you go. Also I have seen Sophie and her master several mornings this week, looking hale and hearty.

A turtle shell I saw on my walk, washed up against a drain. I wondered if this might have been the snapping turtle I did not see here this year, but don’t think the shell is a snapper’s. 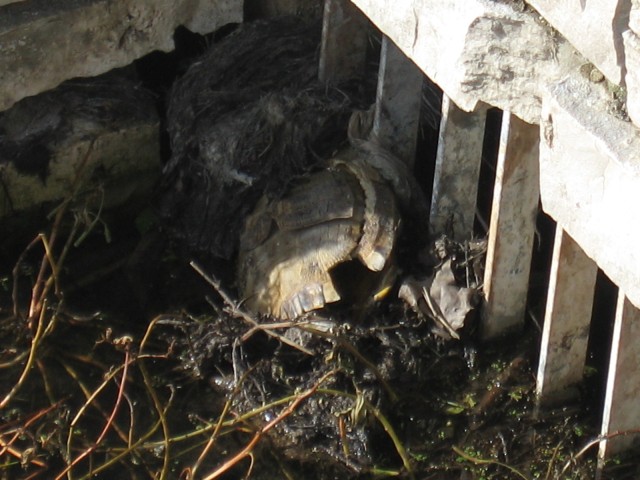 And the almost-full moon through the neighbor’s tree 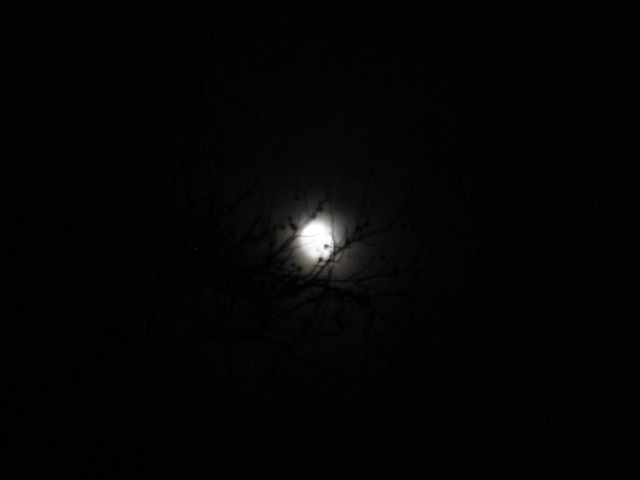 This entry was posted in Critters, Forest Park, Moon, Winter. Bookmark the permalink.